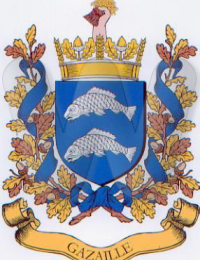 Jean Gazaille aka St. Germain, the ancestor of most of the Gazaille in America and also of many St. Germain, was a corporal in the company of Sieur Antoine Pecaudy of Contrecoeur, Regiment of Carignan-Salieres, based in St. Ours.

He is the legitimate son of Jehan Gazaille, master blacksmith, and of Aubine Reynier. His birthdate is unknown. He was baptized on Monday, 12 December 1639 at Sarrazac, Dordogne(24), France. His godfather is Jehan Gazaille and his godmother Valleyrie Patinaud. His parents' marriage has not been traced yet. It is possible that it could have been celebrated in Sarrazac (many pages are missing in the register), because his parents are said from Lapeyssie, Aubine Reynier's native place and residence of the family according to retraced baptism acts. Jean is the forth child. His brothers and sisters are: Hellie (1625), Margarite (1629), Margueritte (1636), Geoffroi (1643), (for now, more could be found later).

He left La Rochelle, France, on 13 May 1665 on board the ship La Paix and reached New-France on 19 August of the same year. He was confirmed at Quebec, on 13 August 1665 and received the Mont-Carmel scapular.

A marriage contract was established between Jean Gazaille and Jeanne Touze on the 1st of October 1668 by the notary Duquet. Aged of 28, he got married with Jeanne Touze at the church Notre-Dame of Quebec, on Monday 8 of October 1668. This couple will have five children, four will leave descendants. Jean will be said by turns soldier, corporal, inhabitant, agriculturist according to the different documents found. At the time of the Census 1681, Jean was living at the Seigniory of Contrecoeur and his possessions were one rifle and 2 acres of developed land.

Jean is the direct ancestor of Charles St. Germain who took up arms and lent the family house as a fortress at St-Denis-sur-Richelieu, at the time of the Patriot's rebellion of 1837-1838. Many family members and friends died there.

Today most of his descendants are found in the Monteregie and Eastern Townships of Quebec. From the 17e to the 19e century, the Gazaille aka St. Germain were mostly agriculturists even though we see them today in all spheres of the society.

Note on the Regiment of Carignan-Salieres:
Its duty completed, the regiment was called back in February 1668, and returned to France except about four hundred soldiers and thirty officers who preferred to stay to clear the land and settle for ever in the colony. The King of France promoted the settlement. He offered vast Seigniories to the officers who could afford to colonise them. He gave a granting of 150 pounds to sergeants and of 100 pounds to simple soldiers. Officers and soldiers of Carignan settled along the shore of the Richelieu River which had been the theater of their feat of arms.

Note from the author:

My texts were often copied and added to other websites(including my mistakes - smile). I wrote and published them in my first website in May 2003.